The Peak District has a long history of ornamental stonework and a bigger variety of decorative materials than perhaps any other area in the Uk. The most important amongst these are . . .

Blue John A variety of fluorite found in a small area to the west of the village of Castleton. The material has been worked since around 1750 and fashioned into a variety of objects, originally classical style urns but more recently smaller bowls and jewellery. A typical vein is only some 3ins thick, so larger objects such as the piece in the photograph were turned from a number of sections laminated together

Ashford Black Marble Not a true marble but a jet black bitumenous limestone found in thick beds near the village of Ashford in the Water. From the end of the 18th century the stone was used as a base for floral inlays after the style of Florentine pietra dura and fashioned into a wide variety of objects such as these desk thermometers for the Victorian tourist.

Alabaster Found in South Derbyshire and North Staffordshire, alabaster has been used since the 14th century for ecclesiastical carvings. In the 20th century many workshops produced tourist items although none are in existence now. Some of the larger pieces in Blue John can be found mounted on bases of alabaster and Ashford Black Marble.

Calcite on Fluorite, Ladywash Mine, Eyam 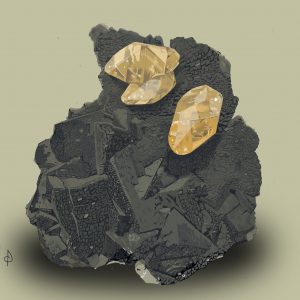